From "The Tempest" by Billy Shakespear

Our revels now are ended. These our actors,
As I foretold you, were all spirits, and
Are melted into air, into thin air:
And like the baseless fabric of this vision,
The cloud-capp'd tow'rs, the gorgeous palaces,
The solemn temples, the great globe itself,
Yea, all which it inherit, shall dissolve,
And, like this insubstantial pageant faded,
Leave not a rack behind. We are such stuff
As dreams are made on; and our little life
Is rounded with a sleep.

Looks like we're on for March 18th for the G-tube surgery. Froggy has to be completely healthy, and we'll need permission letters from her CF doc, Neurologist and we'll meet with the Anesthesiologist for an accessment.

Wednesday, we have an ultrasound for her liver. But her last blood work two weeks ago - liver enzymes were normal. Woo hoo.

We're ready for this next step.
Posted by Froggymama at 10:19 PM 2 comments:

Froggy had her follow-up appointment with the GI doc today.

Here's what we know:

Froggy had two scans last week. One showed her upper GI, the other showed how her stomach empties.

Both results were mostly normal. The tests showed some thickening in her gastric folds - which is common for CFer's. Her gastric emptying was also mildly slow. Neither of these facts seemed to bother the GI doc, and they are going to schedule the surgery in the next few weeks. First we have to get approval through our insurance. I get warm fuzzies just thinking about the red tape!

March 3rd, we'll do an ultrasound on Froggy's liver, since her levels were a bit high.

At some point we'll have a meeting with the Anesthesiologist, another meeting with our Nutritionist, and today they ran blood work to check Froggy's coagulation, vitamin levels, and liver enzymes.

Froggy was a champ, but then at the park was very rude to a little girl who was apparently taking too much time on the slide and called her 'nasty.' Oh dear.

She's an incredible girl, spirited, talented, artistic and dying from CF. She's received over 1200 comments on her last post, and I'd love it if everyone would visit her blog and write a kind word.

I've been reading Eva's blog for a while now and just fell in love with her. Like most young adults I've met/read with CF, she's beyond her years in maturity, wisdom and understanding. Froggy sent her a picture she drew that is hanging on her hospital wall. I'd appreciate it if everyone would support her with some love as she journeys on. Thank you. -Froggymama
Posted by Froggymama at 12:06 AM 1 comment: 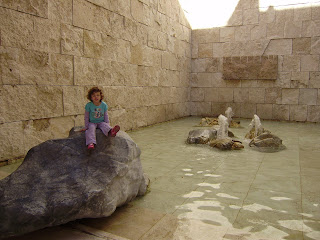 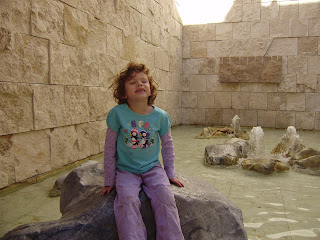 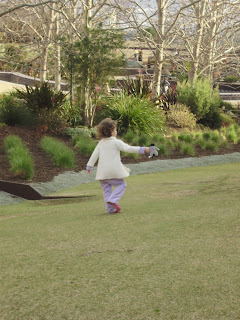 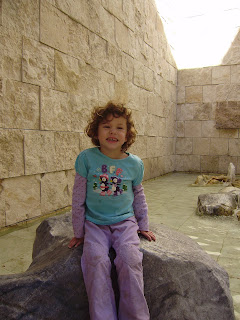 With the upcoming G-tube surgery, I've been trying to take Froggy out on adventures around the city. Last week we visited the Getty and had a fabulous time climing rocks, running down hills and saw maybe two paintings. Froggy wasn't into the art.
Posted by Froggymama at 10:39 PM 3 comments:

Our last clinic appointment (February 2), Froggy was all clear with her throat culture. No Pseudomonas thank you very much! And at our next appointment, Froggy will start PFT's (pulmonary function test). As usual the nurses and doc were thrilled (despite weight gain, but hey, we're used to that) with Froggy's health!
Posted by Froggymama at 10:32 PM No comments: 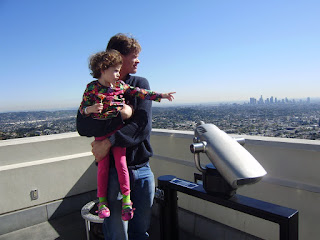 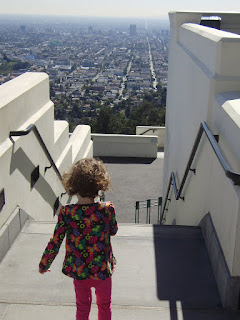 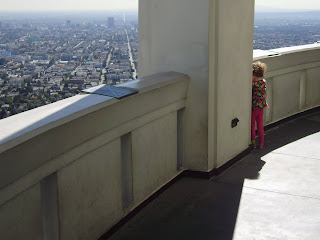 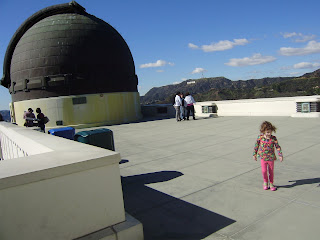 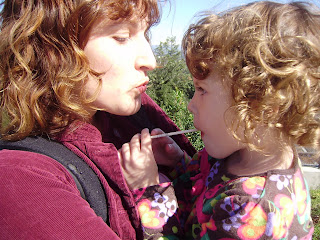 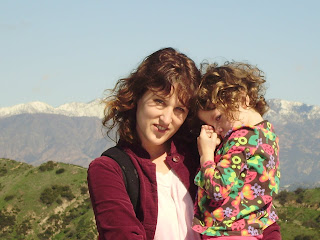 After a long morning of 'hospital' we hit the observatory, had lunch in Los Feliz and visited one of my favorite book stores. I love days like this --the ones you anticipate to be so terrible, and instead prove that life is after all -- quite wonderful.
Posted by Froggymama at 10:01 PM No comments: 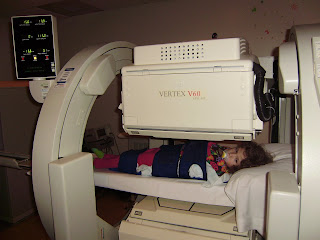 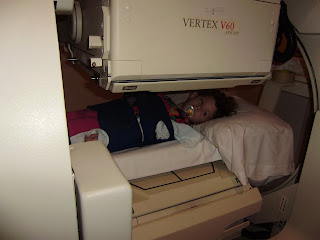 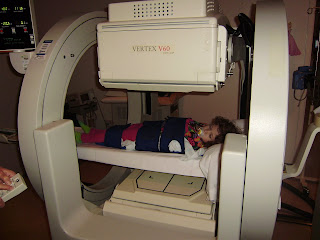 Never have we been more proud of our little Frog.

When the appointment was scheduled, we weren't told that Froggy would be TIED DOWN for two hours while they took pictures of her 'stomach emptying'.

They told us she was not to eat or drink for eight hours prior. We complied and our little Froggy was starvin' marvin' by 9am. FD made her a snack breakfast and she snarfed down a pbj, bacon, cheese and blueberries. The tech was impressed.

I told Froggy that after she ate she was to dress up like a mummy, all wrapped up, so they could take pictures of her belly. For two hours, she lay perfectly still watching a video and only started to get impatient at the end.

It's so funny because Froggy is such a little stinker for us at home. But at the doctor's office, she is an absolute angel! She anticipates what the doctor is going to ask her to do, sticking out her tongue before asked, lying down for her exams, she's a pro at throat culture, rarely gets too upset, even for a blood draw. It's like she becomes her best self when the going get's tough. Wow, what a kid. So proud. And for the record, I would still be proud even if she screamed through the entire procedure.
Posted by Froggymama at 9:08 PM 3 comments:

Froggy came down with a stomach virus on Friday and hasn't eaten much. She's lost some weight, but finally started eating again today. This mama was nervous and almost cried when Froggy ate a piece of bacon today.

We met with the GI doc and here are the facts:

We have four appointments in the next two weeks. They'll run tests on Froggy's GI system to make sure everything runs smoothly and all organs are in the right place.

We'll meet with our GI doc again on the 16th to discuss the results of everything and most likely will go into the hospital for the g-tube at the end of February. Froggy will spend three days in the hospital and have to wear a big tube for about three months. After that, her tube will be replaced with a button.

I welcome any advice, help, words of wisdom regarding the g-tube. We are entering unchartered territory and it's scary.

Tonight we were snuggling in bed discussing nicknames. Froggy asked mine, I said, "Lisi, Spucky, Froggymama, and my mean older sister used to call me Wienie."

I said, "You have nicknames too. Froggy, Addiecakes, Babybean, honeybuns, etc, etc." Froggy said, "No my nickname is Matches, call me Matches."

What? She is such a weirdo. I bought her a new little pet toy and she named him "fruit treat." What a goof.
Posted by Froggymama at 8:41 PM 18 comments: