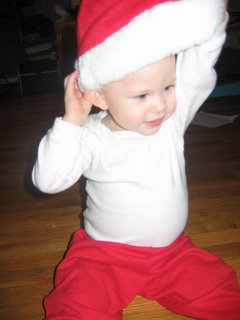 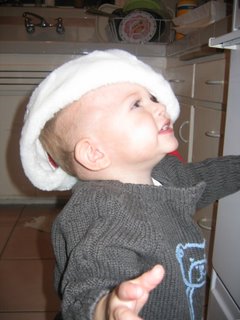 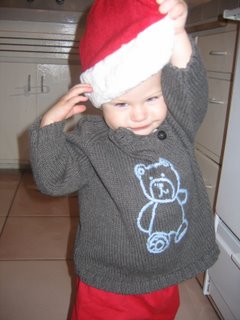 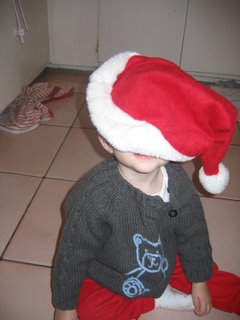 These are my sad attempts of getting a holiday photo. It was an impossible task. Putting the hat on Froggy, who by the way, HATES HATS, was not easy. Plus, I was relying on a 15-month-old to sit still for 2 seconds, and of course the annoying delay on a digital camera didn't help.

She's actually a great ham, who poses for the camera with big smiles, but I was unable to capture it. I must say, I like the silly imperfect pictures much better than the posed ones.

This reminds me of a picture of my sister and I when we were kids. My mom wanted the "perfect" shot by the capitol building in Des Moines. We were wearing matching outfits -- striped one-pieces, with elastic around the torso, and the kind that crept up (you know where) all day. We were constantly reaching and pulling fabric out of our butts, and in the words of my father, it wasn't very "lady-like".

The sun was in our eyes, reflecting off the river. It was hot, humid, mosquitos were out for evolutionary vengence, and we were not happy campers. Mom kept saying, "Open your eyes," and we replied "but the sun hurts MOM!"

It was torture and it's quite evident in the pictures. We were squinty, angry, sweaty girls, looking at the camera like, "someone better call Social Services, because this has to be child abuse! Can't we just get our ice cream and go home!"

I realize now that a few seconds of being uncomfortable might have been worth the great pictures that would be admired for generations. But it felt fake to us. Who cares about posed pictures with a great background and a river reflecting the capitol building. It sounds good in theory, but when my kids or grandkids look at it, they'll probably say "boring". The pics my offspring will enjoy are the ones with me eating toilet paper as a babe, my black-eye pose - after falling down the stairs, the shot where I took a nap on our black lab, Mandy; or the pic of my sis and I at the farm in our overalls (matching of course) picking mulberries in the old feed bin.

I love the pictures that are literally a "snapshot" of life. Because they catch our personality when we aren't expecting it. Nothing is hidden, and the person captured doesn't have time to worry about their lipstick status, or static hair. Those are the ones that matter, the ones that truly reflect who we are as people.

These pictures say, "Froggy hates hats!" And I love that.
Posted by Froggymama at 7:15 PM

i couldn't agree with you more...my mother in law (who sadly just passed away in september) was a master of taking candid photos. and in turn...for her memorial...her children put together an incredible slide show of photos of her...in which it felt like there was a hidden camera that caught her in action rather than posing throughout her life. it was really terrific. these pictures are adorable. jcn

Your baby is so gorgeous. I love visiting your blog just to see her beautiful smile!!! she reminds me a good bit of my girls when they were little (they're 8 and 10 now!) - but not enough for that to be why.

You are a lucky momma.

Zuska, welcome! Thank you so much. Glad you enjoy the blog. I just checked out yours and I'm hoping it will inspire me to get in shape. Ah, one of these days...

ugh- don't read THAT one - that's my "why oh why can't i get my butt out of bed" blog. Read my OTHER one - zuskalaw.blogspot.com. Where I don't whine about being fat (that often).

I found you via Mieke, way back when you started the blog and she plugged it shamelessly ;) She obviously loves you and your family!

ugh- don't read THAT one - that's my "why oh why can't i get my butt out of bed" blog. Read my OTHER one - zuskalaw.blogspot.com. Where I don't whine about being fat (that often).

I found you via Mieke, way back when you started the blog and she plugged it shamelessly ;) She obviously loves you and your family!

Haha too precious
~Kim from CFF

I feel the same way. My first mother in law liked to do those Sears portraits dressing everyone in matching acrylic sweaters - also from Sears. And this was when her children were adults. She got HUGE copies of them and hung them one after another, year after year in the hallway. Who knew there was such a varied collection of acrylic Christmas sweaters out there. I refused. For so many many reason. Who likes those? BLECH!

Mieke, I would pay a million bucks to see you in a Reindeer sweater posing at Sears with the faux winter background, tossing a styrophome snowball through the air. I LOVE THOSE kind of pics.

the first pic and the last one are my favorites!! oh man, she's a riot. i hope i get to come down and visit you guys again sooN!! ~tina

Tina, you are welcome to visit anytime. We LOVE having you here!!! And Froggy adores you, of course. Just be sure to wear that shirt with the shoulder strings. It kept her busy for hours!