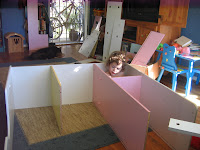 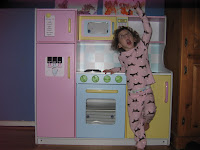 This is Froggy's new kitchen. It took me 9 hours to assemble. I'm not kidding. Nine hours of my life I will never get back. And don't hate me Mom, but after working on it for a couple hours, I overheard Froggy in the hallway with her toddler tools saying, "Ugh, dammit!"

Let's just say this kitchen is earthquake, hurricane, tornado and toddler proof. And with some screws missing from the box, I had to make a trip to the hardware store where I had to ask questions like, "do you have a philips flat head screw in 5/16ths of an inch?" The screws were so tiny they said I had to go to a jewelers. But fortunately the man behind the counter had a secret stash of tiny screws. It may have been code for something perverse, but I didn't care, the kitchen had to be built! And ta da, here it is! The things you go through for your child.
Posted by Froggymama at 10:53 PM

That looks FANTASTIC! Way to go, Mama! Froggy looks well in her element there ... here's hoping it gives you a bit of a break while she's entertaining herself (and assorted make-believe others). :-)

Hey! Kaylen has that same kitchen! Santa brought it last year and she plays with it all the time. I hope Froggy gets as much joy from hers.

Oh wait - upon closer inspection the kitchens are a bit different but still - very, very similar. :)

That is one awesome kitchen, my kids would love that! And I must say, that is most impressive that you assembled it yourself! You should have seen us assembling toys on Christmas Eve, we grew VERY concerned that it wasn't going to get done by the morning.

What an adorable little kitchen, even if it did take 9 hours to put together! Had I attempted that, Froggy would be playing in something resembling a collapsed building. :)

oh my - you really are SUPER MOM. i commend you. jcn

I remember putting your swing set together (also about a 9 hour project with instructions written by someone whose native language was obviously not English with phrases that read something like "apply the screwdriver to the screw and screw taughtly"). I got halfway through the assembly when I realized that the drawing in the instructions was a mirror image of the actual end result so I had to tear it apart and start over. At that point I hurled the screwdriver at the garage sticking it well into the siding while taking the Lord's name in vain (which you or your sister later repeated to your mom).