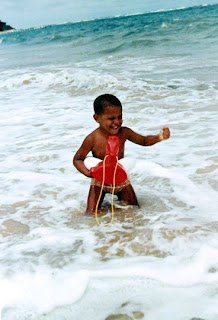 Barack Obama surfing
I don't usually post political stuff, but after listening to about 30 hours of political commentary (tv and radio) in the last week, I need to vent... Joe Lieberman's speech put me over the edge. If you don't want to hear my political views, don't read them.
I find it disconcerting that Senator Obama is being criticized for being too eloquent, too intelligent, and accused of being an elitist. I believe it is because for the last eight years, we have become quite comfortable with the dumbing down of our leaders. Maybe it makes us feel they're accessible and maybe we've traded intelligence for that accessibility. I don't know. Maybe having a dolt in the White House somehow made us feel better about us. If a 'C' student can become president, anything is possible.

Maybe the idea of a leader who knows basic sentence structure, and who can properly pronounce the words "nuclear" and "Abu Ghraib" is threatening. We're just not used to leaders who lead. We've become accustomed to leaders who are led. Obama is too smart for us, and that's scary. And that is scary to me. It's like a Kurt Vonnegut novel, or Twilight Zone episode where a nation of intelligent people decide it's better to have an orangutan running the country. Because if the monkey gets out of line, just give him a banana and lead him in the right direction. It's safe in a self destructive way.

One of the reasons GW was praised was because he was a likable guy, someone you could have a beer with, a good ole boy. Look where that has taken us? I don't want a leader I could have a beer with, or someone I could whip on a crossword puzzle. I want a leader who is diplomatic and chooses his words carefully. A leader who isn't quick to anger or even quick to befriend. I want a leader who will understand the implications of phrases like "If you're not with us, you're against us." And how our place in the world is not to bully, but to co-exist.

I want a leader who respects other cultures, religions and other people, a leader who believes everyone is entitled to the basic rights of health care, marriage, and dignity. I want a leader who is comfortable enough in his own skin to follow his ideals, but not so comfortable to give a German Chancellor a back massage, or make up cute nicknames for the presidents of leading nations. I want a leader who is worthy of respect and worthy of leading this country. I want a leader. And if he's smart, or an eloquent speaker, that's a good thing. We're not a nation of morons and I don't want to be represented by one anymore. It's embarrassing. Shouldn't the definition of patriotic be that our leader, the representative of our nation, the face of our people be someone who actually makes us look good? If so, I'm ready for that change.
Posted by Froggymama at 12:17 PM

Well, I am Canadian so while the election is important to me it is beyond my control, but kudos to you for saying your views. I agree wholeheartedly.

Furthermore, to all those people in North America who whine about those in power...get out and vote. My view is if you don't vote, don't bother complaining!

You remind me, over and over, what a great writer you are. I want to read more of your work... I know, I know... I will keep my fingers crossed that the stars will line up, and one day, it will happen...