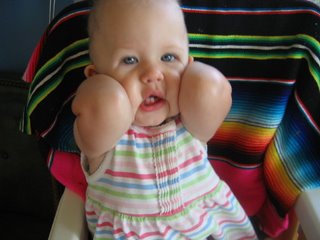 Tonight as we were doing Froggy's respiratory therapy, I told FroggyDaddy(FD)to watch this funny part of a kid's video. We've been watching this Sesame Street musical DVD forever and rather than going totally insane, I'm starting to find the little things funny. Like this one girl who is spacing off and then starts jumping up and down wildly on command. Her eyes roll back in her head and she totally spazzes out. You can tell that someone is coaching the kids behind the camera, and she turns on like a windup toy. So I find this hilarious and point it out to FD. He looks at me pathetically and says, "oh, you're really finding humor in the little things these days, aren't you?"

I realize that as of late, there hasn't been much discussion on Sarte's philosophy of the existential life, or the fact that Pluto isn't really a planet after all, the scare of global warming, an appreciation of theatre, films and books. But from the moment I get up in the morning, our lives are Sesame Street, lunch, naps, walking the dog, dancing to kid's music and acting silly. For now, I've lost my adult sanity. By the time Froggy goes to bed, my brain is mush. Too mushy for writing, or talking. All I want to do is zone out in front of the tube and watch some cheesy story on Primetime or 60 Minutes about how the mold in our showers is slowing killing us, or how America's Children are in big trouble unless we get rid of vending machines at once, or the fact that in 2012 an asteroid will come dangerously close to earth. This is my life...for now.

I know that someday we will have the funds for a babysitter so FD and I can go to the theatre, and we will once again watch movies where there aren't puppets or children spazzing out on command. And I still find time to read in the tub to keep my brain functioning like an adult. But what's a Froggymama to do? My life now revolves around a one-year-old who just doesn't appreciate a Shakespearean sonnet, or film noir. If I didn't find humor in a Sesame Street DVD, I would go insane. Our brains were not made to function at a Kermit the Frog and Grover level, so I've found a way to find a DVD that I've watched 436 times funny. Until Froggy is ready to discuss politics, this is the best I can do.
Posted by Froggymama at 7:36 PM

Have you guys joined Netflix? All parents should be members. It has saved our lives.

You are just emerging from the most demanding part of parenting. You'll see by the time Froggy is one and half you'll really have a lot of your life back and it just keeps getting better. You'll have your eye on preschool (have you made your decision about that yet?) in no time. May I recommend Pacifica Montessori? They are wonderful about working with kids who need a bit more attention. There was a girl there who had a life-threatening allergy to peanuts, the kind where if there was a hint of peanuts in the air she could explode. They were great about being vigilant. Just a thought.

Thanks Mieke. We just joined Netflix. I have THE THIRD MAN and PRIDE AND PREJUDICE to watch. Now if I could just stay up late enough to watch them. :)

Ah The Third Man!!!! One of my favorites (I love the theme music too)

Great blog you've got going! And an absolutely adorable little froggy. I've been following her on Mieke's blog.

Having read your earlier post on what you long for---blue skies, mountain hikes, and quiet---I have to ask: why the videos for Froggy? The longing of your heart is the longing of every person's heart (even and especially that of a child)---for quiet so we can hear the important, listen to the voice outside ourself, and connect with true meaning. I'd quit the world's ways (videos, noise, and more noise) and instead offer Froggy what her heart (and your heart) longs for. Quiet. Stillness. Rest. A time for thinking. Reading. Being. Just some thoughts from one who is still longing to learn from the quiet, Froggyaunt

Froggyaunt, I agree. We only watch the kids videos for Froggy's treatments. Since it takes 30-45 min, we need a distraction and books are too difficult with the nebulizer, until she can do it herself. We definitely could use some quiet though. And I do get some respite at night, with a good book and a bath. Reading helps quiet the day. But some hikes are in our future.