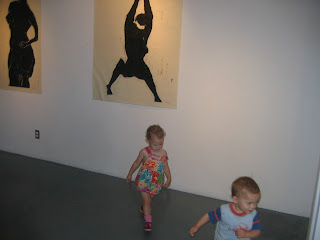 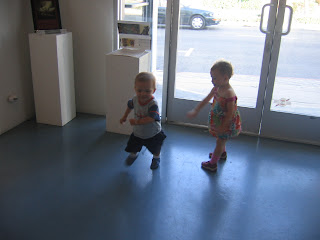 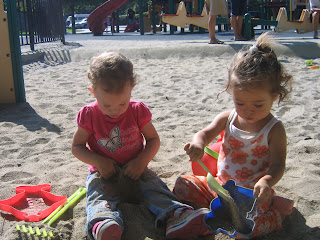 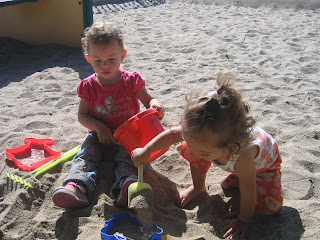 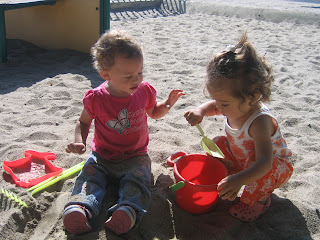 Life goes on. As stressful as this is, we aren't sitting at home. Froggy needs sunshine and her friends. The first two pics are of Froggy and her boyfriend "The Bub" at his daddy's art show. And of course you all know her best girlfriend "Hummingbird".
We're all set for Froggy's EEG! It's scheduled for this Friday at 9am. We have to go an hour early to register, and they told us to prepare for an eight hour day. Yikes. After the EEG, we will wait in recovery for Froggy to fully wake from the sedative. And I believe (but could be wrong) that the EEG is about 2 hours.

Froggy hasn't had a full blown seizure in two days, so we're very happy. Yesterday around bedtime, she had the eye deviation a little, but no stiffness or shaking. Her sleeping pattern has been crazy though. Last night she fell asleep around 8pm (normal) but woke up at 10pm and was awake til 1am (soooooo not normal or fun). Froggydadda was wonderful and took her for a late night stroll, and tried to entertain her, but alas she kept yelling "MAAAAMMMMA!" So we were all awake! It was like she had consumed four espressos before going to bed. I'm not sure if she's afraid of going to bed because that's when she has the seizures, or if they are keeping her awake. She says, "eyes" a lot. So maybe her eyes are hurting, or maybe she can't control them, and that bothers her. It's so difficult to say.

Her pediatrician called today and said that all of her vitamin levels came back normal, although her zinc was a 'low normal.' So we'll discuss this with her Pulmonologist. Her wonderful, fantastic, amazing Pediatrician was very comforting and said that seizures are relatively common in kids, and the fact that they are very mild is a GOOD SIGN. Yay, it's good to hear something positive.

I must say I have not been handling this well. I am just so angry. On top of all of this, four of our pharmacies (ask our insurance company why we have so many freaking pharmacies), all four screwed up Froggy's meds. And our insurance company decided that all of a sudden they needed a 'prior authorization' for one of her more expensive medications. Gee I wonder why?That little ploy stalled her meds being delivered by a week, so she missed four doses. Another pharmacy sent her acid blocker out on Friday (even though I requested it on Tuesday), so the refrigerated medication sat on a hot truck over the weekend. It showed up in a large box with a tiny ice pack (that was of course warm). When I asked the pharmacist how they could do this, he said, "it was packed in ice." At this point Froggymama told the pharmacist that he was obviously not going to take responsibility for this, to which he agreed, and that was that. And then our nebulizer stopped working. I lost it. On top of all the 'on top of stuff' - trying to schedule an EEG and an MRI with the approval of an insurance company is like asking a grizzly bear to please part with his dinner.

Today was better. No nap, but it's 7:30 and she just went to bed. Hopefully tonight will be seizure free and full of sweet, sweet dreams.

Posted by Froggymama at 3:07 PM

awhhh...i'm so glad to hear she hasn't had one in a couple of days. here's to a good night sleep for all of you. hang tight. thinking of you. jcn

You are a far stronger woman than me for being able to handle adversity with such grace. Well, that's the appearance you give, anyway. Maybe you're using those skills learned in high school drama oh so many years ago. :-)

Cute pics! Well, The Bub sends his love from afar and hopes that Froggy will be dreaming of him in the EEG.

Well, here's to a good day tomorrow with some good news at the end of it. We're all thinking of you, sending you love and strength.

Elise, you HAVE been handling this extremely well. There is NOTHING wrong with expressing anger, especially when you're justified, which you are. You don't always have to be the person that keeps everything together and cleans up messes other people make, all the while being "pleasant". Give yourself a little credit, please.