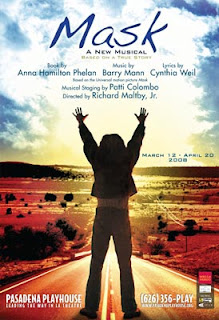 My aunt and uncle in-law treated me to a night of theatre at the Pasadena Playhouse. It was the musical version of the movie MASK.

I happen to like musicals, and was interested in how they could have added song and dance to such a tragic story. If you're unfamiliar, the film is about a boy with a disease that causes his cranium to develop abnormal calcium deposits, causing his eyes to be 3 inches apart, with major facial deformaties. But his existence and positive spirit change the lives of everyone around him. He helps his mother get off meth, and reconnect with her true love, and it is his dream to ride a chopper to Sturgis, but he dies before he has the chance.

There were moments that were difficult to watch -- when his mom sings to him in bed, saying how she wishes she could fight his battles and make everything right. Sob sob. At one point I scanned the nearest exit, in case I had to bolt for a hysterical cry in the lobby. But, I pulled through and pretended not to be a basketcase. Ahh, the irony of acting in the audience.

It was an interesting show, and if you can get over the fact that bikers spontaneously break into song, it's a great story and very touching. If you're in the area, it's worth seeing. And our friend, and Froggy's swim coach plays the cute biker with the bandana, the drug dealer, and the rabbi. Yep, I'm serious. Sometimes I love LA.
Posted by Froggymama at 12:11 PM

I always liked that movie. Eric Stoltz was great, I hope they found a stage actor to make the part his own.

As you said, it's hard to imagine that movie being made into a movie.

I'm glad you got out of hgte house!!