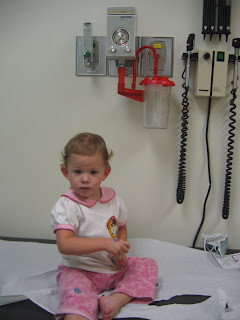 No shots? Then I'm cool. 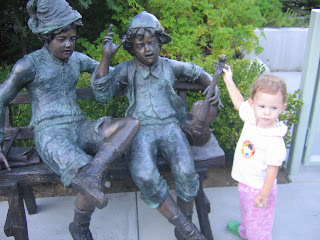 After our appointment, we played in the hospital garden. Froggy walked up to the bench, grabbed the violin and said to the statue boy, "Can I have it?" When he didn't reply, she tried to wrestle it away. Needless to say, he won.

Monday, we had our CF appointment at Children's Hospital. We meet with the CF staff (pulmonologist, nutritionist, nurse) every three months. Froggy had x-rays and was scheduled for a blood draw. But we had already done a ton of blood work at the pediatrician's office when she started having seizures, so I will just fax those to the clinic, rather than poking her twice.

Froggy's little lungs are perfect! The x-ray was blurry, because it's impossible to take a good pic of a moving toddler, but from what they could see, her lungs look great. They took a throat culture to check for pseudomonas, but we won't hear the results for another week. So say a prayer, do a dance, send positive thoughts, that Froggy's lungs are clear.

We had a little setback in weight. Froggy dropped to the 10th percentile (she was in the 25th last appt). The nutritionist was concerned because it's important for her lung health that she remain atleast in the 25th percentile. They ideally want CF kids to be in the 50th, but Froggy has her genes stacked against her for weight gain. FD is super skinny and tall, and I was small as a kid.

If Froggy isn't in the 25th percentile by January 2008, they want to give her a g-tube. I can't even let my mind go there yet. The idea of Froggy having a hole in her belly makes me sick. We're going to fatten this little tadpole up, so it won't even be an option.

The difficult part to accept is that even if Froggy did not have CF, she would still be a small fry. I'm 5'2", and was always petite. FD is 6'6" and barely 185lbs. How can we expect our baby to conquer genetics and pancreatic insufficiency? It just seems unrealistic to expect her to be in the 50th percentile. I don't want to fight what our doctors believe to be the best for her, but my heart tells me that after her toddler stage, she'll start gaining weight at a faster pace. Right now, she's stubborn, hates meal times and fights everything. Gaining weight will be a tough road, but if it means waking up three times a night for a milk bottle, we'll do it. Anything to gain those pounds before January. FD has started a regime he calls, "Operation Peanut Butter." With every meal and snack, Froggy will be required to eat atleast four spoonfuls of peanut butter. We'll also start her on a supplement once a day to help boost calories.

I know we will meet our goal by January, because we're determined. And I'm going to start the g-tube research now, so I can make an informed decision. But even with the discussion of the weight battle, and g-tubes, the important thing to remember is that her oxygen is 100%, her lungs are perfect, she's a healthy, tough, strong little Froggy. If anyone can beat genetics and pancreatic insufficiencies, it will be her. She's one of a kind.

Posted by Froggymama at 9:56 PM

About the eating - it is genetic that 2 year olds become picky; that is how are ancestors survived - when toddlers started wandering out of the cave, it stopped them from eating poisonous foods. We are in the lower percentiles for weight too (10% last weigh-in), so I can understand a little of your frustration.

And I know that at first blush, it sounds horrific to have a G-tube, but I have a friend whose 5 year old, diagnosed with leukemia 3 yrs ago, has it, and she relies on it to keep him healthy (although it is generally not done for kids with immune difficiencies because of the risk of infection -- which he now has :-( ).

But I am sure that the Great Peanut Butter Surge will soon eliminate the need for any surgical intervention!

Good luck, I am thinking fattening thoughts for Froggy!

oops -- it is really monika here... typepad has gone all German on me (it thinks that since I am in Switzerland, I *must* speak German!) and so I couldn't be bothered to try to figure out how to change accounts...

Would it help to send her some of *my* excess weight? Yeah - I thought not but hey - it's the thought that counts. :) I'm thinking fattening thoughts for you all. A friend of mine snuck half n half milk and butter into everything for her toddler when the doctor insisted she gain weight. It worked.

Your posts are a delight to read. Ella had a quick appointment on Monday for a throat culture to see if her pseudomonas is gone. The nurse called to say that so far, nothing is growing.

My days here with Ella are so much fun. She doesn't talk much yet, but does she ever vocalize. I'm sure that when she starts talking, we're in for a treat.

At fourteen months, she'll try almost anything that is put in front of her, which is good. She just is 20 pounds. Hopefully, she'll keep eating and will gain.

I'm so happy for Froggy's good report from the doctor's visit.

FM-I love reading these great updates on Froggy. She is sooooo cute and I am thrilled that her little lungs are doing great. I hope my little one does as well as Froggy. You give me hope!

love the report on the lungs and i love the photo of froggy grabbing the violin. so cute. i think the peanut butter is a good idea. are you skippy or jif eaters? :-) jcn

Mashed potatoes and a stick of butter. Swimming in it! Scrambled eggs with cheese and cream and lots of butter. Cream and milk. The Bub is about 20 pounds at 19 months and he doesn't have CF, he's just seriously off the weigh charts. We call him "Flaco" which is Spanish for "skinny." Doc usually doesn't schedule an appt at 21 months but she wants us to come in since he was supposed to be 20 pounds at 12 months. Got to fatten them up, don't we!!! Well, congrats on the lung health!