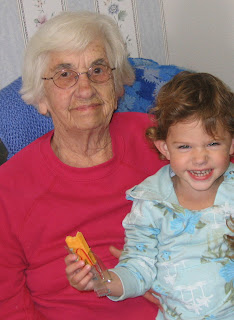 My great-aunt died this week. She was just a month shy of her 93rd birthday.

Froggy LOVED aunt Dorothy (Dort as she was called.) Because we are unable to attend her funeral in Iowa, I wanted to share my favorite Aunt Dort memories.

My sister and I often visited Aunt Dort in Marshalltown, Iowa - a very small town boasting the simpler pleasures of childhood --a candy store, a pond with swans, and Aunt Dort's apartment. We lived in a house in the country, so spending the night in an apartment on a city street with the sounds of cars whooshing by, and the novelty of neighbors on the other side of the wall rather than a cornfield was well just....thrilling! Don't even get me started on the excitement evoked by a communal laundry room. It was like a domestic slot machine, Las Vegas in the middle of Iowa, the splendor of buttons, quarters, and swirling wonder of our pj's getting cleaned. Maybe we were easy to please, but there was something quaint and fascinating about this town, and of course Aunt Dort.

Dorothy never married, and for most of her life, lived with her sister Julie in a white house with fabulous front porch. My very faint memories of that house included an upstairs with slanted ceilings that held what seemed like a bomb shelter supply of paper towels. If ever there were a nuclear war, Aunt Dort and Aunt Julie would be the only two people able to clean up the big messes.

Dort was a wonderful artist, painting china and tiles, and when visiting, we were invited to paint with her. There was something very grown-up about her acrylics and tiny brushes. To be trusted with paint that would permanently stain furniture and table cloths was more fun than actually creating art. That is the beauty of spending time with someone who never had children -they don't know the destruction you are capable of, so they give you dangerous stuff - acrylics over finger paints.

It seems strange now, but one of our favorite things to do with Aunt Dort, was visit the local cemeteries. We'd pick flowers and find the graves of relatives I'd never met and honor them with a visit. I always felt sorry for the dead whose sites were neglected and overgrown with weeds. But Dort always wiped the stones of those we didn't know too, and placed a flower or two in the neighboring sites. One of the cemeteries had a pond that was home to swans and Canada geese. One year both swans were killed, coincidentally one day before Thanksgiving. It made big news in Marshalltown, but Aunt Dort said that maybe the people who killed the pair were poor and couldn't afford a turkey. It was surprisingly optimistic of her. But once you thought you figured Aunt Dort out, you were wrong. She was indeed multi-layered.

Dort said that "Everyday we must do one good deed." I've often thought of that and tried to apply it to my life. She was a big believer in corralling stray shopping carts, picking up litter, driving her elderly friends to church and ice cream socials. She outlived all of her friends, so when the time came that she could no longer drive, unfortunately few could return the favor.

When visiting, we'd stop at the local Wal-mart and Aunt Dort let us each pick out a toy and candy - again someone who had kids would NEVER let us do! But she was never in a hurry and let us spend hours in the pet store, our noses pressed against giant aquariums, and strolling the candy aisles carefully weighing the pro's and con's of gummy worms vs. pop rocks.

There was another side to aunt Dorothy, as there are with most people. We're all complicated and multi-dimensional, and if I didn't mention this, it would be like talking about a turtle and failing to mention that he lives in a shell. Aunt Dort was...well... a little crabby. And I'm not bringing this up as an insult, but because it made her interesting, lively and entertaining. She, like most people of her generation had failed to catch up with the politically correct terms for minorities and would speak loudly in crowded public places while using this outdated terminology. I won't give examples... you know what I mean.

And when my sister was thirteen, which is just an awful and self conscious age, Aunt Dort declared, "Well, you better be careful what you eat, or you'll get a big Johnson butt!" It was horrifying for my sis at the time, but has since become an endearing tale of Aunt Dortisms. She had an incredible ability to find the negative in any situation. And I don't mean this with any disrespect. We all need Aunt Dorts. Had the Kennedy Administration had an Aunt Dort, there never would have been a Bay of Pigs Invasion. She could access any situation with a little constructive criticism and a solution to improve. She was that sharp.

My Aunt Dorothy was a brilliant woman who was insightful until the end. She was a wordsmith, a historian, a connoisseur of current events. Nothing got by her, and as negative as she was, she was also appreciative of the little delights in life. She absolutely adored her great-great nephew E-boy and great-great niece Froggy. These two little hellions could do no wrong in Dort's eyes. Even at lunch, with both kids screaming and throwing food, Dort would come up with a wonderful excuse for their inappropriate behavior. It was anyone else's fault but theirs. She had such a soft spot for Froggy and E-boy and their naughty antics, which makes me think that she too was a little naughty at heart.

And if Dort is remembered for one thing, I hope it is her optimism in the midst of criticism. It was something you could trust. She was honest, always. If you needed to know if you'd gained a little weight, or if your head was balding, if someone was doing a good job...or not... she would let you know, without that Midwest polite reservation. She was what she was, and I loved her. We all did.

Good-bye Aunt Dort. You were one of a kind. May you always have someone as thoughtful as you to wipe away the dirt and weeds from your final resting place, and may we all remember to do atleast one good deed everyday.

Posted by Froggymama at 1:28 PM

Thank you for sharing, I lost my Grandmother who was 100, a few months ago, there isn't a day that I think of something that happened...I do believe that your Aunt and my Grandmother were made of the same cloth....nothing got by her....if you gained weight, she was the first to comment..giggle...She was totally honest, and I loved her for that, you always knew where you stood with her, no games...She was my mentor, I looked up to her....anyways...I am sorry for your loss....But trust me, she is right there, looking out for your little angels...as my grandmother is doing for me...Again, thanks for sharing your heartwarming story!

Oh, I am so sorry for your loss. Just this morning, I attended the funeral of my Great Aunt Eleanor who I lost earlier this month at age 84. She was an extraordinary woman...always doing good deeds, lived with her sister for years, and a little crabby sometimes, all like your Aunt Dort. It is a generation that will be missed, as they bring something wonderfully unique to us younger folks.

I am so sorry to hear about your Aunt Dort, Elise. I had an Aunt Dort of my own who passed away a few years ago, but I think she was your Aunt Dort's long lost twin! When I was little she would pretend to bite my babydoll's hands to get me all upset, but then she would kiss them and make it all better right before I would start to cry. She was a card and she always made me laugh (when she wasn't torturing my babydolls, that is...). Thank you for sharing your memories of your aunt.