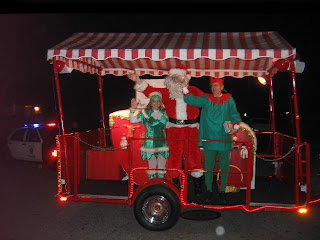 Santa Claus drove down our street on his trailer sleigh last night! 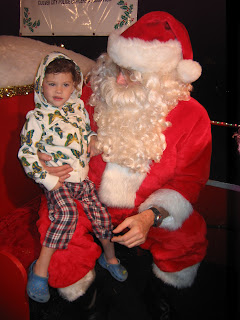 Froggy asked for a camera... in a rather stunned and quiet voice. It appears the big red guy scared the holiday poo out of her. 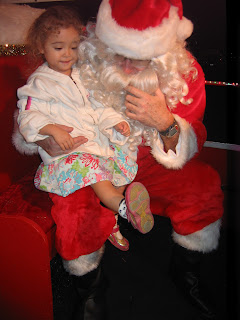 But not Hummingbird. She told Santa he MUST admire her shoes! 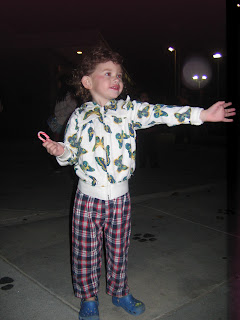 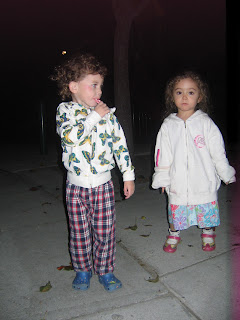 Last night, right after bath, while Froggy jumped on the bed in her skivvies...we heard a firetruck and police car going down our street. Great, I thought, someone's been shot, because this is LA and by now we're used to it.

But no, FD said, "It's Santa Claus!" Whew, waaaay better than a shooting!

I hurriedly threw an outfit on Froggy (check out above photo), and we raced down the street.
Froggy asked, "Does he have my camera?"

"No Froggy, you get that on Christmas day."
After some disappointment that Santa wasn't giving out gifts, she was thrilled to see him, scared to sit on him, but relieved to see that his elf was indeed giving out candy, which is the next best thing to a present. Sooo much fun.

Posted by Froggymama at 1:32 PM

I absolutely love that you've caught Santa and a police car in the same picture. Priceless!

I think Froggy is super stylin' in her eclectic outfit. ;) Her hair hair has grown a lot! How long is it when it is straight?